Today Seth has the central line fitted. I rush home from work to come in and see him. I know he was late going in for the operation. I know that he has been a while. I know his was out later than expected. When I get to his room, a friend who was visiting Em meets me. She looks shaken. There is also a nurse. The nurse explains to me that there were complications due to Seth’s airway being compromised. I’m taken down to PICU (Paediatric Intensive Care Unit) where Em is. What happened has already been covered in a previous blog so I won’t repeat it.

Seth is a mess. I see hair, tubes, wires, bruises, machines, and lights. I take myself to a calm place. It’s too much to take in. Damned if that stupid Athlete song doesn’t enter my head and stay there for a week…

He’s back in the room. Thank goodness the endless of hours sat watching a sedated (though rarely still) Seth are over. He’s been extubated and is no longer sedated. He has lost two front teeth. One was wobbly but the other wasn’t. Guess it wasn’t all that easy taking the tube out.

I call him ‘gap-y’, which replaced the very brief ‘Throat Pack’ – a name which has now been adopted by the toy elephant he was given in PICU.

Something is not right. Seth is no longer in the room. There is somebody here but it’s not Seth.

An MRI and EEG show that he has slow responding brain patterns. We don’t know if this is just temporary or more permanent.

There are moments when Seth is here. I’ve worked out that it’s related to the oral morphine he is taking for pain. (He had so much sedation to keep him under whilst intubated that there are withdrawal concerns and he is being weaned off it.) Within half an hour of taking it he is stoned. Helter Skelter – off his face. Fortunately a doctor sees him before and after.

Seth is finally back. We’re not sure exactly what caused the temporary brain damage but he’s back!

I haven’t been jokey or called Seth any names recently.

Yesterday afternoon for no apparent reason Seth’s hair started to fall out. Suddenly there was loads of it on his pillow. It’s the weirdest thing. There was nothing in the morning. It just started in the afternoon. It’s coming out in clumps. I talk to him about perhaps shaving his head – or at least trimming his hair. He is not keen. This morning it’s just falling into his face. After about the 3rd mouthful of hair he asked me to do it.

It’s odd. Throughout all of this treatment, although I’ve known it’s cancer and although he has had two rounds of Chemo and in spite of all he problems he has had…taking the clippers to his hair is the one thing that really brings home to me that he really, really, really has cancer. 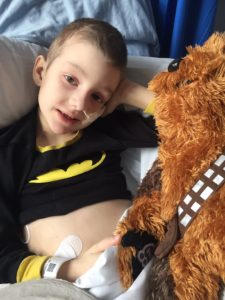