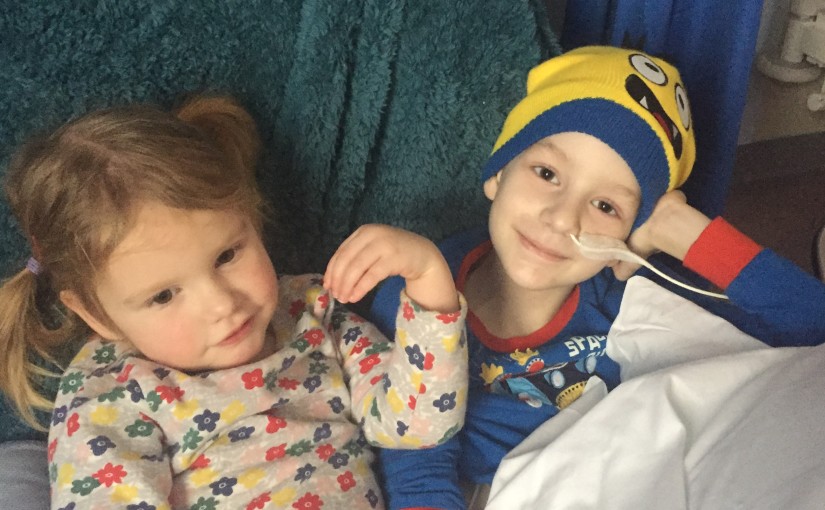 Seth is an average 7 year old boy. He loves Lego, Superheros and Star Wars. He hates potatoes (unless they are chips), unfairness and his sisters nagging him (which they do a lot). He is the third of 4 children and the only boy. His sisters are 11, 9 and 2. He has a dog called Louis (thank goodness for another boy in the family!). Together we all live on the south coast.

On 4th January 2016 Seth went back to school for the start of Spring Term, he came out of school that afternoon with a large lump on his neck. And so his story began….

Our immediate assumption was that he had a swollen gland. A quick trip to the doctors on the way home from school confirmed that it appeared to be tonsillitis and so we headed off to get antibiotics and Seth was told he would need a week off school. He kept telling us that his throat wasn’t sore, but the size of his tonsil meant we were convinced it must be tonsillitis. Four days later and the antibiotics had not started working. A return trip to the doctor and a second opinion – still tonsillitis. By Sunday we were worried, the lump was getting bigger, not smaller and Seth was struggling to breathe at night. I had to work, but called 111 before I left and made an appointment for Ivan to take him to see an out of hours doctor.  Ivan called me later to say that they still thought it was tonsillitis but that he appeared to have an abscess on his tonsil and so he was going to be sent to QA Hospital to get it looked at and potentially drained. We spent the next 4 days in QA undergoing tests for everything and anything. Luckily for Seth the Paediatrician we saw was not convinced it was an abscess and was not happy to just try and remove or drain the lump (this would, it turns out, have been bad). On Thursday 14th January having ruled out all other infections / illnesses and with no reduction in size of the lump or tonsil, we were sent to the Piam Brown ward in Southampton Hospital for a biopsy. After day surgery we were allowed to go home and wait for the results. It was the longest 7 days of our life (at that point – other 7 days have been worse since!) but the day before we were due to get the results we were told that there had been a delay in getting the results and to come in the following week. I was broken by the thought of having to wait nearly another week so Ivan said he was going to take Seth back into QA anyway – we were both  worried about his breathing and airway as the lump was getting bigger still and he clearly wasn’t getting any better.  As we didn’t expect to get results I headed to work and Ivan took Seth in. Early afternoon Ivan called and asked me to come to the hospital, I knew then it was bad news…..

Once diagnosed, with Burkitt’s Lymphoma, treatment started quickly. We were booked to go back into Piam Brown ward 4 days later (Monday 25th January). Unfortunately over the weekend his condition continued to worsen and by Saturday he was back in hospital for monitoring and started on pre-Chemo treatment and steroids to reduce the lump. On the Monday he had a CT scan to ‘stage’ the disease and Tuesday his central line was put in. This would mean no more cannulas  / needles which Seth was so happy about – by now he felt like a pin cushion. He needed a general anaesthetic to put in the central line and that was where it all went a bit wrong! The lump on his tonsil was now so large that when the team tried to extubate him after the operation they couldn’t, his airway was at risk. He spent the next 7 days in PICU, fully sedated, while they waited for the Chemo to start to shrink the tumour so that it was safe to take the tube out. Another excruciatingly long 7 days, sat by his bedside in shifts not able to do anything to help him. The most harrowing part for me was that he kept trying to wake up despite the huge amounts of sedation they were putting into him (enough to ‘keep a horse down’ according to one PICU nurse). During these moments of being awake he would look so terrified and upset, it broke my heart. The nurses got to know him as ‘the boy that tries to climb out of bed’ and we all got used to dealing with these moments every few hours, in fact Seth would warn us when it was about to happen as it would start with him raising one eyebrow in a puzzled way.

Seven days later he went back to theatre to be extubated and to begin round two of Chemo. The operation was successful and we started to get our boy back. In reality it took another 7 days to fully get him back. For a few days he suffered with temporary brain damage – we are still unclear if this was caused by the sedation or the Chemotherapy but it was terrifying. Through everything he continued to fight, and on the 27th February after his third round of chemo finished we finally got to bring him home for a while.

He still has a number of rounds of chemo to undergo and many battles to fight but he is getting stronger each day and taking on each challenge as it comes.